In the early morning of June 4, 1989, Gong retreated from Tiananmen Square with a group of students. When they reached Liubukou, martial law tanks that were chasing them caught up with them, and troops opened fire and released poisonous gas. Gong was hit in the left arm by an expanding dumdum bullet and collapsed. She lost consciousness from gas poisoning, and was taken to the Beijing Emergency Center, where efforts to rescue her failed. Her death certificate said that she “died from suffocation.” Gong’s ashes were cast over the Yellow River. 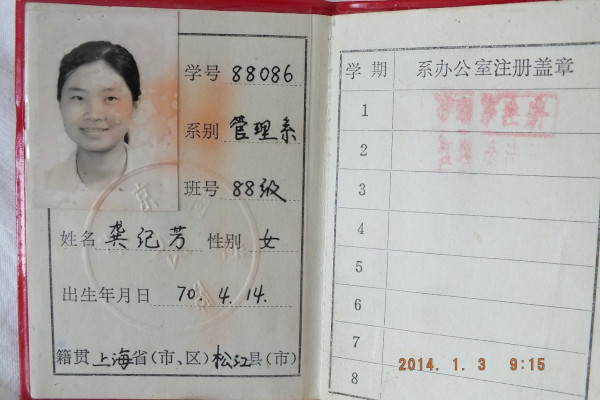 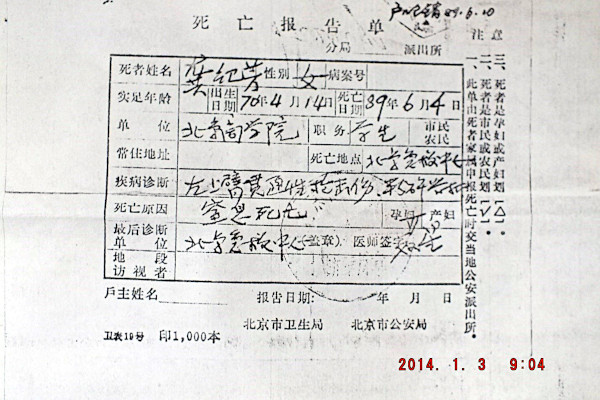 Gong Jifang’s death certificate, stating that she died of “suffocation”

Yin Min and Zhang Yanqiu, members of the Tiananmen Mothers, wrote about Gong Jifang’s parents in an essay in 2014:

In 1989, before June 4, Gong’s father was in Beijing on business. In light of the situation at that time, his wife wanted him to bring their daughter home. But he did not do that, and then the great misfortune befell their daughter. The blame his wife put on him led them to the verge of divorce. He has lived these 25 years in pain, guilt, and self-reproach. Just think, at that time who would have expected that the People’s Liberation Army would shoot and kill unarmed ordinary people and students? In their goodness and kindness, people were made fools.

Gong Jifang was a very beautiful young lady with white skin and large eyes, full of the vitality of youth. She was her mother’s favorite, a beloved daughter. But with the crack of a gunshot, the Communist Party turned her instantly into a blood-soaked corpse covered in wounds. When we saw this horrific photograph, my body shivered and turned cold. After leaving their house that day, I tossed and turned all night, unable to sleep. . . . “Every time I look at these things, it’s like being cut with a knife,” Gong Jiwen’s words rang in my ears, tormenting me until dawn.

I finally understood why, in 25 years, Gong’s parents have refused to discuss their daughter’s death; why Gong’s mother’s family refused our visit; and why they cast their daughter’s ashes into the Yellow River.