Male, 19, a worker at the Beijing Haidian District Leather Research Institute. From: Beijing.

On June 3, 1989, when passing through Muxidi on his way home from work, Wang encountered martial law troops shooting at the crowds on both sides of the street. A bullet pierced his chest, hitting him in the heart. Wang died instantly. His body was brought to the Navy General Hospital.

Wang had worked just half a year after graduating from technical college, and was going to night school after work. He was known for his warmth, diligence, and love of learning. After he was killed, his work unit issued a certificate verifying that he was shot dead on his way home from work. 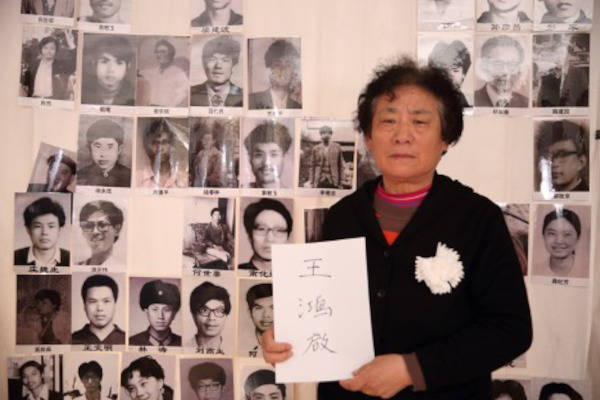 Di Mengqi said in her speech at the June Fourth Candlelight Vigil in Victoria Park, Hong Kong, in 2018:

When I saw the child, his face looked pale and he was just lying there peacefully. Perhaps he had bled out; you couldn’t see much blood on his clothes, and his body was soft. His father and I were afraid to go up and identify him, hoping deep down that this child was not our son. My son had a birthmark on his forehead on the hairline, just like I do. When I saw the birthmark and the clothes my son was wearing when he left home for work that morning, my body went limp instantly and I fell to the ground.

I hugged my son and wept bitterly: “My child! When you left home for work in the morning you smiled and said goodbye to me as usual. How is that in just a matter of hours, you’re gone forever, and you’ve died in such a wretched way? As your parents, we simply don’t know HOW to accept such a cruel, ice-cold fact!”

It has already been 29 years since the June Fourth massacre. As a mother, I hope that our country can give us an explanation for the killings that year, or I will never be able to die in peace. Who did my son offend when he went to work? Why did he get shot to death for no reason? How can I swallow this?