On the night of June 3, 1989, after learning that martial law troops had opened fire on the streets of Beijing, Wang rushed to Muxidi, the place nearest to her home where shooting was occurring, and joined those helping to rescue the wounded. According to an eyewitness, as she braved the flying bullets around her to bandage up the injured, she was shot in the neck. Wang was taken to Peking University Hospital, where she died. Her ashes are buried at Wan’an Public Cemetery.

Wang was born into a family of many children. From a young age, she was recognized as a bright child who liked to study. She entered Peking University Medical School with high marks on her entrance exam, and was the only child in her family with a university degree. At the time of her death, Wang was a resident doctor at the Beijing People’s Hospital and had already decided to stay at the hospital as a staff.

Wang’s father Wang Deyi (王德义) is a member of the Tiananmen Mothers. 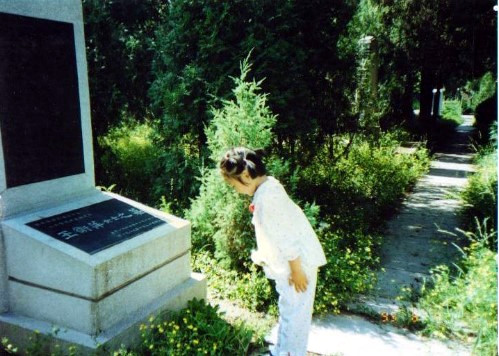 Ding Zilin, a founder of Tiananmen Mothers, wrote in an essay in 2004:

Wang Weiping’s parents were not very well educated. I could tell it was very painful for them to speak of their daughter who died. The mother kept on repeating, “Our Weiping was in Peking l University Medical School; she was going to become a doctor. . . .” In her eyes, going to university was itself a glory, and being a doctor was almost sacred. The father was a Party cadre, and an “old revolutionary” who was in the New Fourth Army. Of course he would never have thought his own daughter would die by the guns of the Communist Party of China, let alone imagine that this would be result of the “revolution” initiated by the Party which he had joined in those years. But he knew very clearly that as someone who worked in “government,” he had to align with the Party and the government when it came to “major questions of right and wrong”. Otherwise, misfortune that one could not even imagine would fall upon him. This was why they did not put their names on Wang Weiping’s gravestone.

As we talked, I mentioned that every year at Qing Ming and on the anniversary of June Fourth, several family members of other victims would sweep Wang Weiping’s grave without fail. Upon hearing that, the couple couldn’t help sobbing. It was only then that they told us: for fear that tragedy would befall them again, they have always avoided “sensitive” periods when they go to sweep their daughter’s grave; that was the reason they never ran into families of other victims.