At midnight on June 6, 1989, Wang was among a group of seven—five men and two women—on bicycles, bringing his fiancée home to Muxidi. After turning onto Fuxingmen Outer Street from Nalishi Road, they were ambushed and fired upon by martial law troops. The five men were all hit. The two women got on their knees and begged, and thus avoided being shot at close range by the soldiers charging toward them. After being shot, Wang was gasping loudly. He was taken to Fuxing Hospital. He stopped breathing in the early morning. The doctor said that blood and air filled his chest, and impaired his lungs’ function, causing him to suffocate to death. Out of the five men who were shot, three died and two were wounded. Wang’s older brother became disabled from his injury.

Wang had just gotten engaged when he died. His death and his brother’s disability devastated their family. Their father became uncommunicative and their mother’s vision became impaired from crying.

Wang’s mother, Zhou Shuzhen (周淑珍), and older brother, Wang Zhenqiang (王争强), are members of the Tiananmen Mothers. Wang’s father, Wang Guoxian (王国先), was a member of the group before he passed away. 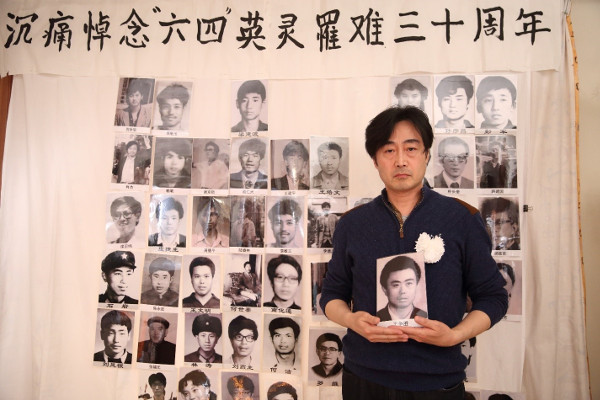 Ding Zilin, a founder of the Tiananmen Mothers, wrote in an essay in 2004:

After he was taken to Fuxing Hospital, Wang Zhengsheng was gasping for air from 1 a.m. to 4 a.m. His older brother, Wang Zhengqiang—also wounded and also in the hospital—was about to undergo surgery when he heard the loud sound of his brother gasping. The older brother asked the doctor to treat his younger brother first.

The older brother came out of surgery at around 7 or 8 a.m., still in critical condition. It seems that his younger brother stopped breathing at around the same time. Two brothers, one dead, one wounded—in one family. The blow to their parents was nothing less than catastrophic.