Male, 23, student in the mathematics department at Peking University. From: Beijing.

Yan was an active participant in the 1989 Democracy Movement. On the evening of June 3, he took his camera and headed with his classmates to Muxidi to take photos of what was happening—to record history. At around 1 a.m. in the morning of June 4, Yan was shot in the artery in his upper right leg. He was brought to the Navy General Hospital, but because he had lost a large amount of blood, attempts to save him failed.

Yan was described as a friendly student with excellent grades who cared about politics and current affairs and was involved in research and debates on social issues.

Yan’s father suffered at the hands of the Party after the loss of his son. Like all intellectuals of his generation, Yan’s father had dedicated his youth fully to the Communist Party. In the aftermath of June Fourth, during the investigation period, the Party forced Yan’s father to write a self-examination and to admit that he had failed to properly discipline his son in allowing him to take part in the Democracy Movement. Under enormous psychological strain, Yan’s father later became schizophrenic. 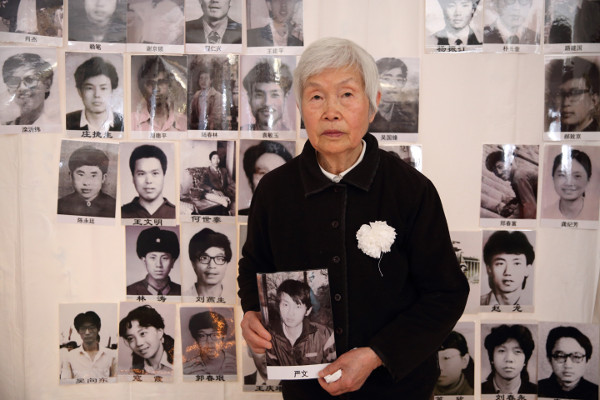 Ding Zilin (丁子霖), a founder of the Tiananmen Mothers, said of Yan’s father in an essay in 2004:

Yan's father, who was not yet 60 at the time, is now 73 years old, and the wounds in his heart could never heal. Last year, when he visited Jinshan Cemetery with his eldest son to sweep Yan Wen’s tomb, he couldn’t stop himself from crying, and his condition has kept on declining since. He keeps calling his son’s name in his dreams, repeating again and again that he has done him wrong. We can tell that what his work unit said all those years ago, that he had not properly disciplined his son, continues to torment him every moment in his subconscious, and he can’t free himself from it. All these years, his family has sent him to many hospitals, and all the doctors say the same thing: that this is not common Alzheimer's, but is caused by severe psychological trauma. Now, the old man is no longer clear in his head; he is bed ridden, just counting his days.