Male, 41, deputy director of the Administrative Department at the Beijing No. 1 Machine Tool Electrical Equipment Factory. From: Beijing.

On June 3, 1989, at around 11:30 p.m., Yang left home on his bicycle. In the early morning of June 4, he was shot twice at the Fuxingmen overpass. One bullet shattered his arm. The other pierced his lung and exploded as it exited his back. Those at the scene took him to the Beijing Children’s Hospital where efforts to save his life failed. The next morning, Yang’s family and friends searched everywhere for him, and finally found his body at the hospital’s morgue. Yang’s ashes are buried at Beijing Wenquan Public Cemetery.

He left behind a daughter who was in fifth grade, a frail and elderly father who had suffered a stroke, and a wife who shouldered the heavy burden of taking care of the family alone. She never remarried.

His wife, Guo Liying (郭丽英), is a member of the Tiananmen Mothers. 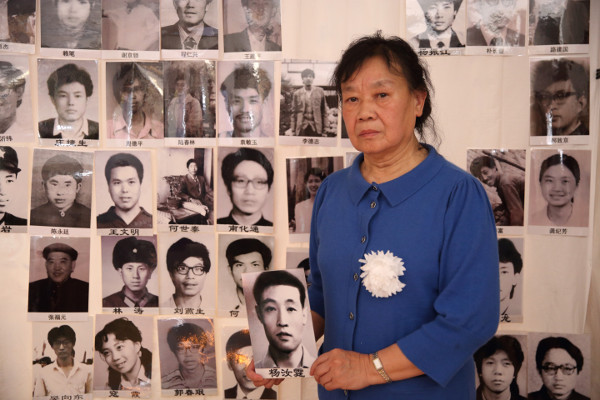 Guo Liying, wife of Yang Ruting, wrote in her testimony in 1999:

The heavy burden of life has given me severe high blood pressure and heart disease. With the warmth and help of my co-workers, relatives and friends and with the unselfish help of society at large and overseas students and friends, I've gotten by for ten years. I hope the Chinese government will give us justice.