On the night of June 3, 1989, Dai left the university on his bicycle to head to Tiananmen Square. At around 11 p.m., outside the Mausoleum of Mao Zedong, he ran into martial law troops who shot him three times in the chest. Dai was brought on a three-wheeled cart to the Beijing Friendship Hospital, where he died soon after emergency treatment began. Du’s teachers and classmates went to various hospitals in Beijing to look for him, and finally found his body at the Beijing Friendship Hospital.

Dai was the oldest son of a poor peasant family. Described as a diligent and motivated student, Dai was the first person in his village to go to university. His mother fainted at the news of Dai’s death. For two years, she was bedridden, unable to walk. Less than half a year after Du’s death, his younger brother became schizophrenic.

Dai’s mother Zhu Jingrong (朱镜蓉) is a member of the Tiananmen Mothers. 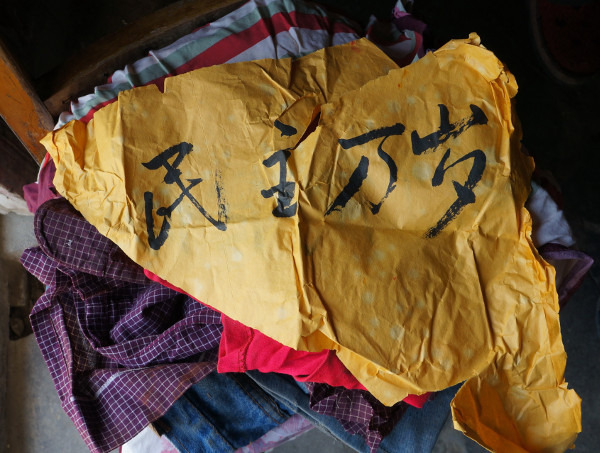 Zhu Jingrong, Dai Jinping’s mother, said in an interview in 2014:

“At the time, when the school sent us the news, everyone hid it from me—they were afraid that I couldn’t take it. They hid it for a few days. Later, the school sent a telegram and it was delivered to my uncle’s house. My uncle then told me the news. As soon as I heard it, I fainted. After I came to, I didn’t want to live anymore. My child was the key member of our family, the main pillar. He was our family’s only hope. In the countryside, it wasn’t easy to provide for a child so that he could get ahead. And when he did succeed, who would have thought that such a thing would happen to him. I thought that the capital, Beijing, was the safest place. Who would have thought that going to school in Beijing would cost him his life? My child didn’t violate the law, and didn’t rob or loot. He lost his life for nothing. How could this make sense to me? I spent two whole years paralyzed in bed. I couldn’t walk. After receiving the telegram from the school, his father and a few nephews-in-law went to Beijing. They didn’t let me go. They were afraid that I wouldn’t be able to take it. They took his body from the hospital and cremated it at Babaoshan cemetery.”

“I believe that the government should give us an answer. It was extremely difficult for a poor family like us to raise and nurture a child to become a graduate student. I was sent to do manual labor in the countryside. I once worked as a substitute teacher at a community-run village elementary school. I didn’t make much, 18 yuan a month. It was so hard to bring up my son. I ask that the government compensate us. I must stay strong and live to the day when the government gives us an answer. We’ve already waited more than 20 years. As a mother, it is so painful for me to see other families’ children of my son’s age still alive, and my own innocent son was shot to death for no reason at all. We are old. We live day by day. I hope that the government can resolve this when we’re still alive so that we can close our eyes in peace. Otherwise, we’ll die with this injustice unredressed! We ask that the government not delay anymore. You can’t drag this out forever—so many lives lost! The People’s Liberation Army is supposed to fight invaders. How could they shoot the civilians of their own country, especially unarmed, defenseless ones? Human life is priceless. A life disappeared just like that? This is truly outrageous!”