Male, 27, technician at the Beijing Forklift General Factory; graduate of Beijing University of Technology. From: Beijing.

Beginning in late May 1989, Kuang and his newlywed wife, Fu Yuanyuan, had been stopping in Muxidi everyday on their way home from work to support the students. On the evening of June 3, the couple was separated at the Muxidi Bridge, where martial law troops had reached as they moved through the city from west to east, killing people on their way. Kuang was shot in an area west of the bridge. The bullet entered his back, pierced through his liver, and exited at the right side of his abdomen, leaving a large exit wound. He was taken to the Beijing Electric Power Hospital. Because the hospital was already overwhelmed with injured people, he was later taken to the Beijing Fengtai Hospital, where he died. Kuang’s ashes have been kept in his home since his death.

Kuang’s wife, Fu Yuanyuan (付媛媛), is a member of the Tiananmen Mothers. Fu never remarried. His father, Kuang Diqing (邝涤清), was also a member before he passed away. He had raised Kuang alone after his divorce from Kuang’s mother. The loss of his son brought desolation to his final years. 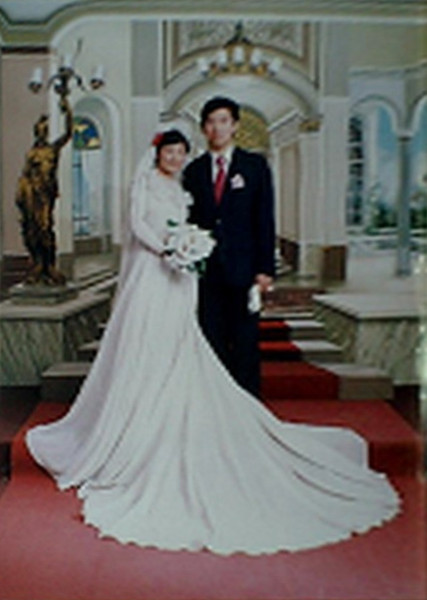 Kuang Diqing, father of Kuang Min, wrote in his testimony in 1999:

On June 8, I saw my son in the mortuary of Fengtai Hospital. Just one glimpse of his face made me cry so hard that I almost lost my senses.

After those who had come with me had pulled me away, the cadre of the fork lift factory trade union and some of my son's fellow students changed my son's clothes. While they did that, they took pictures of his body, both from the front and from the back. They told me afterwards that he was struck by a bullet in the back which pierced his liver and belly. The entry wound was small, but the exit wound was very large, which indicates that he was hit by an exploding bullet. When I went to the cremation area at Babaoshan Cemetery on June 9 to get information, I saw soldiers standing on guard. They told me that I had to follow a certain procedure, that I had to write an explanation of the circumstances of my son's death. If I wrote down that he had been shot, they could not complete the cremation procedure. There was also someone who said that the bodies of some of those who had been killed had been wrapped and passed off as victims of a car accident before they could be cremated. I refused to do it that way. Heaven knows, these butchers killed my son, and they expect me to cover their tracks? If they didn't want to cremate him, I was prepared to leave his body in the mortuary forever!

On the afternoon of June 12 I received notification from Electricity Hospital that the public security office had demanded that my son's cremation take place within two days. Only then did I write a simple explanation of the circumstances of his death, stating the actual facts, and on June 13 I completed the procedure for cremation. I still keep my son's ashes in my home. The Fork Lift Main Factory later gave me 1,000 yuan as support. I hadn't asked for it.

My divorce at age 32 left me with my son as my only child, and I depended on him for my life. He married in 1987 and he did not yet have children. In an instant, a family of three fell apart: my son died and my daughter-in-law left. On whom can I depend in the future? A lonely 70-year-old man like me, old and poor, suffering from a lung condition, my life hanging on a thread-I am at a complete loss: who will support me in the future? For those despotic dictators nothing is sacred!