Male, 25, graduate student in the Applied Physics Department of the Beijing University of Posts and Telecommunications. From: Wuhan City, Hubei Province.

At dusk on June 3, 1989, Li went out on his bicycle. In the early morning of June 4, he was at Fuxingmen, where martial law troops were firing into the crowds. He was shot by the troops in the abdomen. Civilians around him took him to the Fuxing Hospital, where he died. Li’s father was told by the principal of the Wuhan school in which he taught to go to Beijing, and only found out that his son had died once he arrived. But he never got to see his son’s body: the university said it had already cremated Li’s body “because it could not be preserved in such hot weather.”

Li was the oldest of three sons in a poor family. His mother died young. His father, raising three children by himself on a school teacher’s salary of a little more than 30 yuan (about $8) a month, could afford only to send one child to university. As an undergraduate and graduate student, Li was said to be a hard-working student who exceled in his academics. A statement issued by the university explaining his death said that Li was “respectful of teachers and elders, a unifier among students, and an upright and honest person”.

Li’s father, Li Xianyuan (李显远), is a member of the Tiananmen Mothers. 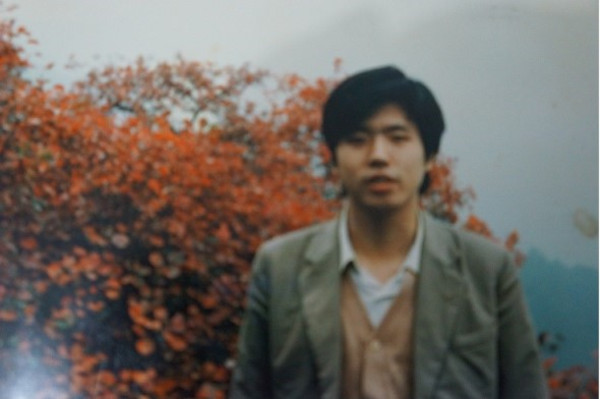 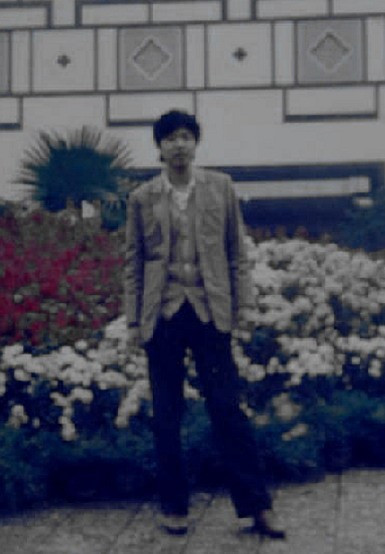 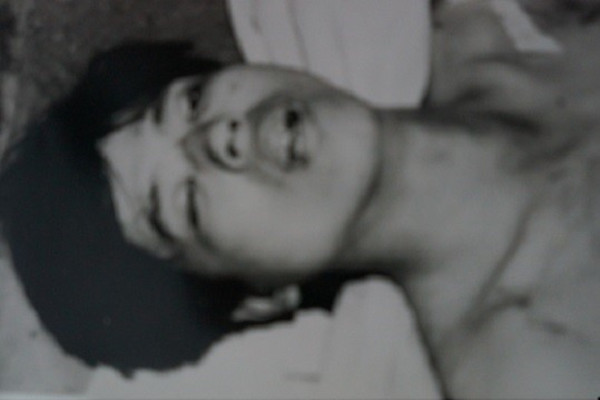 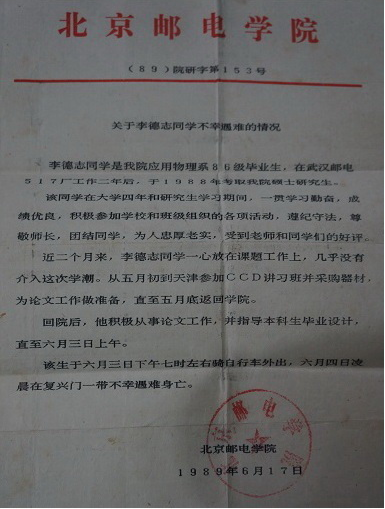 Classmate Li Dezhi graduated from the Physics Department of our school in 1986. After working at the Wuhan Post and Telecommunications No. 517 Factory for two years, he tested into our school’s Masters’ program. This classmate, throughout his four years of undergraduate and graduate studies, was consistently hard working, had excellent grades, and energetically participated in activities organized by his school and his classes. He obeyed the rules, respected his teachers, worked together with his classmates, and was honest and sincere with people. He received positive evaluations from his teachers and classmates.

In the recent two months, classmate Li Dezhi was entirely focused on his studies. He hardly joined the student demonstrations. From the beginning of May, he was in Tianjin participating in the CCD instructional workshop and equipment procurement to prepare for his thesis and did not return to school until the end of May.

After returning to school, he was actively engaged in thesis work, and guided undergraduate students in the department in their graduation planning, until the morning of June 3. At around 7:00 p.m. on June 3, this student rode his bicycle off campus. At dawn on June 4 near Fuxingmen, he was killed unfortunately. 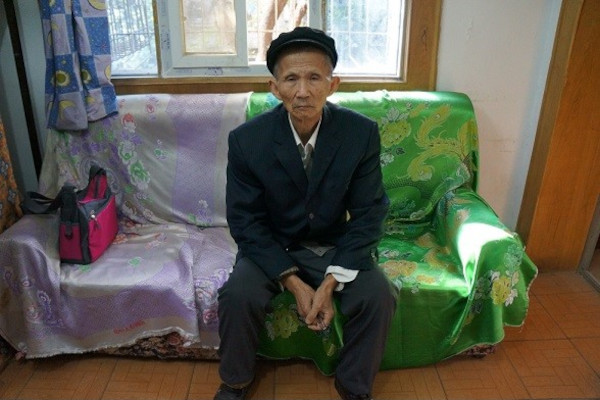 Li Xianyuan, father of Li Dezhi, wrote in an essay in 2009

It has already been 20 years since 1989. I have not had one night of uninterrupted sleep, frequently waking up from a dream. In my dreams I often see my son, which gives me great comfort. Because daytime never brings me happiness, I wish this world did not have day, and that there was only night. That way, I could see my son often, and spend more time with him, never waking up from the dream. I hate that the earth moves so slowly during the day and so fast during the night. Could it be that the earth has something against me?

The first few years afterwards, the horror of my son’s death filled my head. I didn’t go out for years, not even to my niece’s wedding; I lost contact with many relatives and friends. I kept my head down when I walked outside, and colleagues and close friends would likewise pretend that they didn’t see me. My suffering was great, and my tears flowed inward. Well-intentioned doctors would remind me that going on like this would be very dangerous as I could easily become mentally ill. This instantly reminded me that if I went mad and died from illness, with my son’s case unjustly remaining unsolved, how would I be able to account for that when I met my son on the other side? I had better continue living, to demand redress for my son’s death! This gives me courage. I am redirecting my attention, not allowing myself to torment myself.

Recently, I saw a story in a newspaper about a smart and cute dog that had been beaten to death. The owner of the dog won a lawsuit achieving justice and financial compensation. Is my son really worth less than a dog?

Li’s father Li Xianyuan in an interview in 2013:

“My son was completely innocent. He did not participate in any activities. He was only on the street to see what was going on when he ran into the gunfire. I ask that this government put the June Fourth massacre on its official business agenda—lay out the truth clearly and tell us why these students were shot to death. Nowadays, even if only a dog is shot dead, they would have to find out who is responsible. Let alone a person—a fresh and pulsing life! My current mood is terrible. I often can’t sleep. And if I do sleep, I dream. When I dream, I often dream of my son. My health is also poor.”

“I’m 75 years old. I’m sick everywhere. I only weigh about 100 pounds. At my check-up, I learned that I had atrophic gastritis, multiple cerebral infarction, brain atrophy, and other kinds of illnesses.

“My thoughts are that the country should first resolve the compensation problem in accordance with the law. Because he was just a student and not a thug, by law, there should be compensation! I am old and cannot afford to see a doctor. And while the government pays out compensations, it should investigate the truth, make the facts clear, and take steps to resolve it.”