In the early morning of June 4, 1989, near Qianmen, Liu was shot in the abdomen, causing his intestines to spill outside his body. Classmates around him put back the intestines and used a small basin to cover the wound while they took him to the hospital. Because of the severity of his injury, he could not be saved. Liu was one of four Tsinghua University students killed in June Fourth.

Liu’s parents were intellectuals who had gone to Xinjiang Province as part of the “support the construction of border areas” campaign. The Tiananmen Mothers have been searching for Liu’s parents for years but have not found any leads. 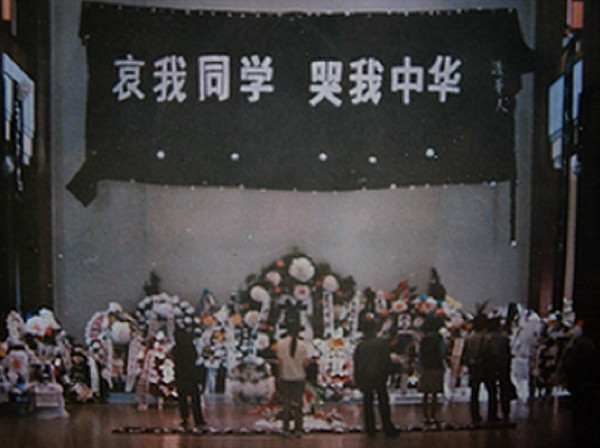 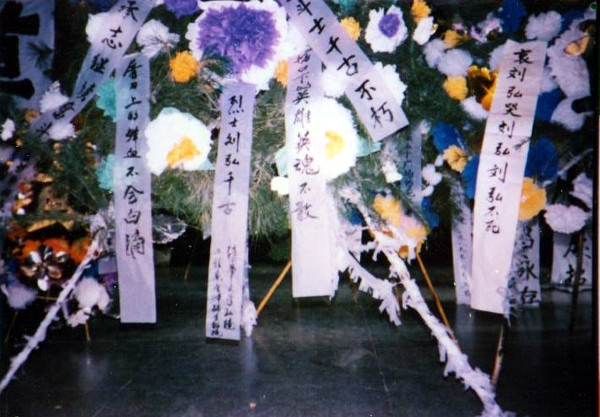 Wreaths and inscriptions from Tsinghua University students and teachers for Liu Hong. The one on the right reads, “We mourn Liu Hong, we weep for Liu Hong, Liu Hong lives.”

Ding Zilin (丁子霖), a founder of the Tiananmen Mothers, wrote in an essay in 2005:

Recently, when I was going through photographs of June Fourth victims that I have gathered over the years, two of them once again caught my attention.

The first one is of a memorial hall in the small auditorium of Tsinghua University set up for the student victims after the June Fourth massacre. On the back wall of the hall, on a large black banner hanging high it is written: “Mourning our classmates, crying for our China,” signed “The people of Tsinghua University.” Below the banner, the character for “Offerings” is written in black on a white background. The floor is filled with flower wreaths and flower baskets. People are seen standing before the shrine.

The other photograph shows wreaths with dedications to Liu Hong. The elegiac inscriptions on the wreaths read: “The spirits of the fallen heroes will always be with us,” “The fresh blood on the butcher’s knife was not spilled in vain,” “We mourn Liu Hong, we weep for Liu Hong, Liu Hong lives,” and so on. The inscriptions are signed: “With deep condolences from students and teachers of the environmental engineering department, Tsinghua University.” This photograph confirmed the fragmented information we had found about Liu Hong’s death. . . .

On the list of those killed in June Fourth that we have compiled, the 30th victim, following Liu Hong, is Zhong Qing, also a student at Tsinghua. He was younger than Liu Hong, and was only 21 when he died. He was an undergraduate in the precision instruments department. He died on the night of June 3, 1989 in Muxidi. According to eyewitnesses, Zhong Qing was shot in the head, and the bullet shattered half of his face. They were able to determine his school and his identity from the keys he was carrying.

The reason why I specifically want to mention these two victims is that up until today, I have been unable to find their relatives. Over the past 15 years, I have contacted, both directly and indirectly, many teachers and administrative staff at Tsinghua University, trying to get leads from them regarding the whereabouts of the victims’ relatives—all to no avail.

On Mother’s Day last year, when I was interviewed by overseas media and received condolences from friends, I thought of Liu Hong and Zhou Qing—the two names that are so close and yet so far beyond reach—and I could not help weeping. I cannot imagine how the mothers of these two victims endured these 15 long years. In these past 15 years, they have not been known by others, or received help or comfort. It is as if they have been annihilated by this noisy world, as if they have been utterly forgotten and abandoned by those trying to outrun one another in the race of life. The indifference of my compatriots makes me shiver.