On June 3, 1989, at around 7 p.m., Luo went to Tiananmen Square with a close friend. In front of the Labor Union Building near Muxidi, Luo was hit by two bullets. One of them was a dumdum bullet that exploded inside his chest, injuring his liver, kidney, and stomach. Those around him took him to the Fuxing Hospital. As the hospital was already overcrowded with injured patients, they then took Luo on a flatbed cart to the Guang’anmen Hospital. There, they operated on his liver and stomach. He died on June 6 from acute kidney failure. Luo’s ashes are buried at Badaling Public Cemetery in section 7.

Luo was said to be filial to his parents and fond of reading books. After the Cultural Revolution, he entered a technical high school before he went on to study at the China Central Radio and TV University (now the Open University of China). At the time of his death, he was preparing to apply to do graduate work and had just been promoted to assistant engineer. 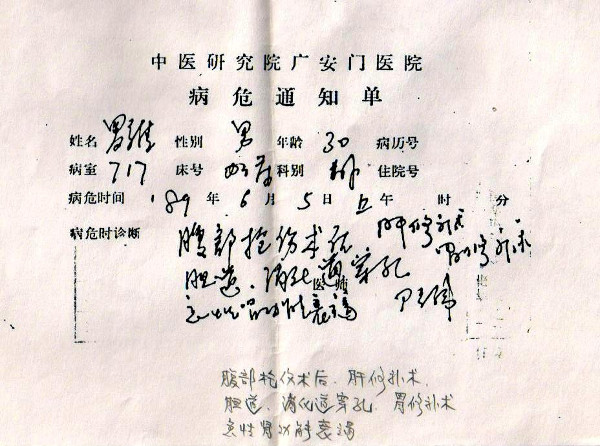 Guang’anmen hospital notice of Luo Wei’s critical condition, indicating “acute deterioration of kidney functions, following surgery in the abdomen for gunshot wound—which left holes in the gallbladder and liver—and operations to repair the liver and the stomach” 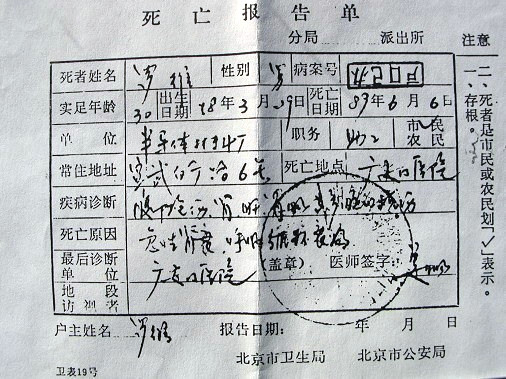 Death notice for Luo Wei, with cause of death listed as “acute kidney failure”

Shao Qiufeng, mother of Luo Wei, said in a video interview in 2009:

I still cannot work out in my mind: precisely what crimes did Luo Wei and the others commit to deserve such cruel punishment? He was just a young person who went to Tiananmen Square to take a look because he was concerned about the situation, yet why can he never come back?

His death left us in boundless sorrow, a sorrow that will forever tear at our hearts. Twenty years! Luo Wei's shadow has always been with me. In the night, a thin and tattered dream lingers in my head: “Luo Wei went up to the mountains and down to the countryside; he put down roots in a peasant village, and he can't come back.” This longing that I could never let go has haunted my dreams for 20 years. I, as a mother who has lost her child, just cannot let go of this bond of flesh and bone, and it will likely stay with me for the rest of my life. It is because he will always be an inseparable part of my life, because he is, after all, my son, and yet he is just gone in one night, at age 30, in the prime of his life.

Weren’t dumdum bullets banned by the Geneva Convention? In the evening papers, our leader always said to us, “The people need to be peaceful and friendly.” Yet using this banned weapon to kill—what for? Because the People's Liberation Army is a heroic model for protecting the country, we the people respect it. Yet on June 4, 1989, why did the soldiers pick up their guns to kill their own brothers and sisters!