On the night of June 3, 1989, at around 11:20 p.m., Wang took his camera and biked toward Tiananmen Square. At around 1 a.m. on June 4, at the southern intersection of Nanchang Street, north of the Great Hall of the People, Wang was shot by martial law troops. The bullet entered the upper left side of his forehead and came out behind his left ear, leaving a bullet hole at the back of the motorcycle helmet he was wearing. The martial law troops blocked those around Wang from taking him to the hospital and dragged him to the roadside. According to eyewitnesses, an elderly woman knelt before the troops and pleaded with them, but a soldier pointed a gun at her and said, “He is a rioter. Any more nonsense from you, and we’ll shoot you dead!” Wang died at 3:30 a.m. The troops concealed his body, along with others, just under the grassy surface of the lawn in front of the entrance of the Beijing No. 28 High School, west of the Tiananmen Gate. Around June 7, the area was hit by heavy rain, which began to wash away the dirt on top and reveal the clothing on the bodies. And a stench also rose. After school authorities intervened, the bodies were dug up. Because Wang had recently returned from military training and was wearing an old military uniform, he was mistaken for a martial law soldier and was brought to the Huguosi Hospital of Traditional Chinese Medicine and kept at the morgue there. It took until June 14 before his family was able to locate his body. His ashes are kept at the cinerary hall of the Beijing Wan’an Cemetery.

Wang’s mother, Zhang Xianling（张先玲）, is a founder of the Tiananmen Mothers. His father, Wang Fandi（王范地）, also a member of the group, passed away from illness in 2017. 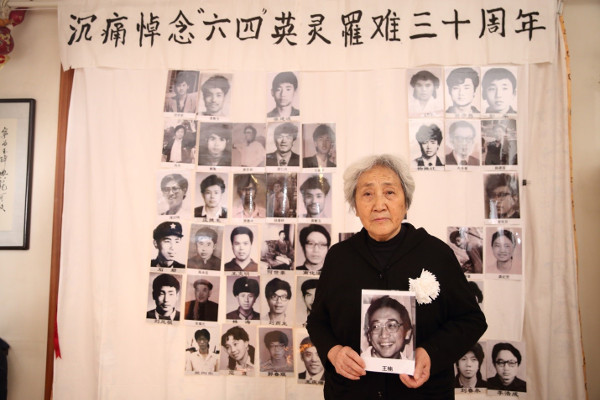 Zhang Xianling, mother of Wang Nan, wrote in an essay in 2004:

June 4, 1989—even though the day has receded with the passage of time, it is carved deeply into the heart of every good and honest person. It is because on that day, evil bullets robbed us of the lives of hundreds and thousands of innocents, and injured thousands and tens of thousands more. The blood shed on this day made people see clearly, and woke me from a life that I had been living in ignorance.

On the night before, on June 3, my youngest child Wang Nan, a 19-year-old high school student, was caught up in the carnage at the southern intersection of Nanchang Street, very near Tiananmen Square. He had taken to the streets in pursuit of justice, and to bear witness to historical truth. . . .

He had paid great attention to the student movement, and gone to take photos almost every day at noon. One time, he asked me for money to buy film, and said that he wanted to put on record valuable scenes from an unusual historical incident. . . .

[After his death,] I finally found the first witness. He was a taxi driver named Liu. As soon as he heard that I was Wang Nan’s mother, he blurted out, eyes blazed: “That was your son!” He then described what he saw: He was on Nanchang Street. When the martial law troops started firing, a young man rushed out to take pictures, and then he was gunned down. When the crowds rushed out to try to help, the martial law troops blocked them—no one was allowed to get close to those who had fallen.