Male, 21, student in the journalism department of Renmin University of China. From: Chengdu City, Sichuan Province.

Xiao actively devoted himself to the 1989 Democracy Movement and had participated in the student hunger strike in Tiananmen Square. After the June Fourth crackdown, Xiao was preparing to return home to Chengdu. On June 5, at around 2:10 p.m., as he was taking photos on the southern end of Nanchizi Street at Chang’an Avenue, he was shot by martial law troops. The bullet hit him in the back, struck his heart, and exited through his chest. Those at the scene took Xiao to the Public Security Hospital on a flatbed cart. By the time he arrived at the hospital, he no longer had a pulse and was pronounced dead. After his body was cremated, his parents brought his ashes back to Chengdu. They are buried in the public cemetery in Yinqiao Village, Shuangliu District, Chengdu City.

Those who saw Xiao grow up described him as a sensible child. His parents said that as a young man, Xiao had a strong sense of justice, an interest in politics, and concern for his country and people. In early June, in Tiananmen Square, he wrote his last will and testament addressed to his parents saying: “My sense of social responsibility does not allow me to remain silent; my sense of historical mission does not allow me to be timid,” reflecting that his determination to change society would never change until death. (See more excerpts from Xiao’s will below.) 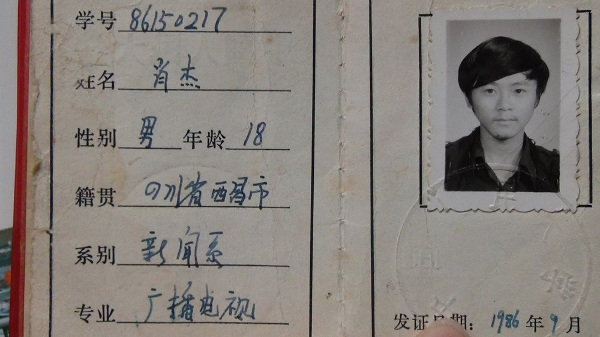 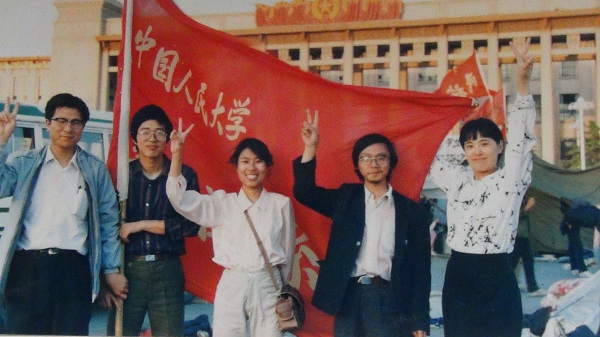 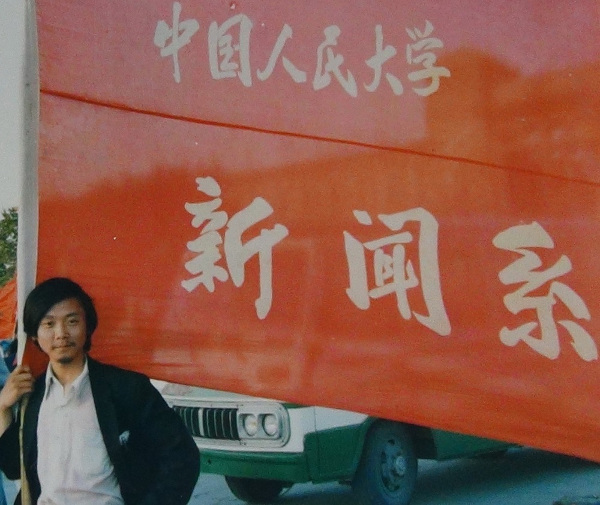 Xiao Jie, with the flag of the Department of Journalism, Renmin University, 1989 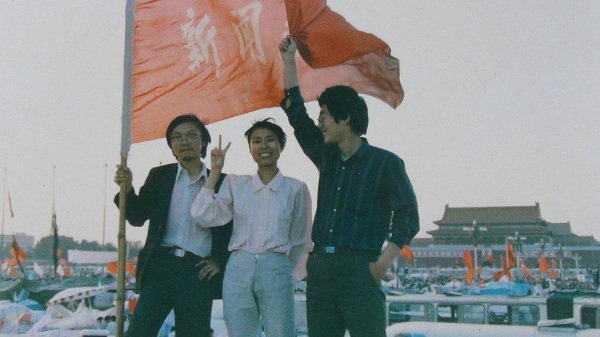 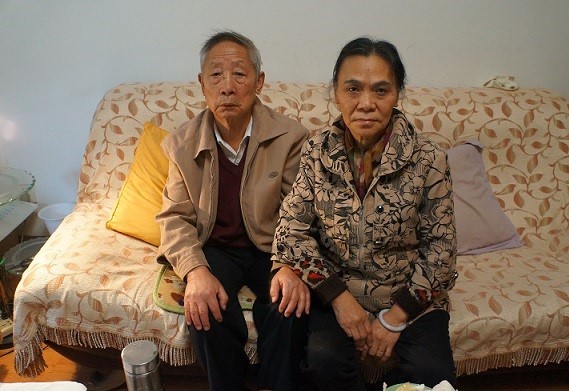 Excerpts from Xiao Jie’s Last Will and Testament

Respected and Dear Father and Mother:

Your unfilial son will be leaving you.

Your son knows that you have expended great efforts and suffered enormous hardships to raise me from an infant to a man. This isn’t something that can possibly be covered by a few ten thousand yuan. I will never be able to do enough to repay your kindness of bringing me up. Even so, with great regret, I cannot help but suppress the sorrow and leave my loved ones. . . .

The country has taken a wrong path and has sunk into a quagmire of poverty and backwardness. With privilege in their hands, rulers live decadent, corrupt, and debauched lives. Children of high-ranking officials use their power to act like tyrants and do evil things. In this society, thugs lord over the people and run amuck. Police wallow in filth with the real dregs of society, who pay them off with cigarettes and liquor, and they behave as viciously as wolves and tigers with the common people, beating and kicking them. Hundreds of millions of honest peasants are still mired in ignorance. . . .

Perhaps it’s a pity that my heart has not become numb completely. This wakefulness results in my spiritual suffering. I cannot (note: six characters are illegible in the original document) look at these things and pretend I don’t see them and remain indifferent and numb! My sense of social responsibility does not allow me to remain silent; my sense of historic mission does not allow me to be timid; my unrealized ambition does not allow me to wallow in the mire! I want to climb to the top and yell out loud. I want to wake up those folks from their deep sleep. I want to shake their numb souls! Wake up, my China! . . .

I believe that in several decades, when people look back at those of us who are considered by the current society as “counterrevolutionary elements”—and even if the regime which selfishly puts itself ahead of the interests of the state and the people is still in power, and if we are still viewed as “counterrevolutionary elements”—the day will come when history will recognize our value fairly. History will prove that we did not let down this nation and this country. We, with our flesh and blood, are the vanguard and cornerstone of China’s democratization and modernization!

I have nothing in this world that I cannot bear to part with—except both of you who gave me life and raised me. (Except for you both, there is no one in this world who is truly emotionally attached to me and cares about me). Not being able to show my filial piety and to repay your kindness for bringing me up and nurturing me is my greatest and last regret in life. How I wish I could repay you! But since antiquity, it has not been possible for someone to be both loyal and filial. I must be loyal to my ideals and my convictions and loyal to this poor and backward nation and people. In order to not give you even more pain because of my act of rebellion, I must shed my tears and bear the suffering! Please swear at me, this selfish son, who has the heart to leave his biological parents behind for the sake of his ideals and convictions!

Let your son call you for the final time, Father and Mother.

“Who since ancient times has been spared death? Let me but leave a loyal heart shining in the pages of history.”

Tiananmen Mothers Speak out: The Story of Xiao Jie（肖杰）, 2014
(Click the “cc” button on lower right of screen for English subtitles.)

Our child studied in Beijing. He offered his suggestions for reforming the country. He didn’t commit a crime that deserved death. In many countries, when dealing with such events, they would just use rubber bullets, which would not kill people. But it was the Communist Party that openly used real guns and real bullets to crack down on unarmed students. Clearly, the Communist Party is the one that committed an egregious crime. You can say that it was a heinous crime against the Chinese people. Twenty-four years have passed since this massacre happened. My boy has still not received justice. I cannot accept this. 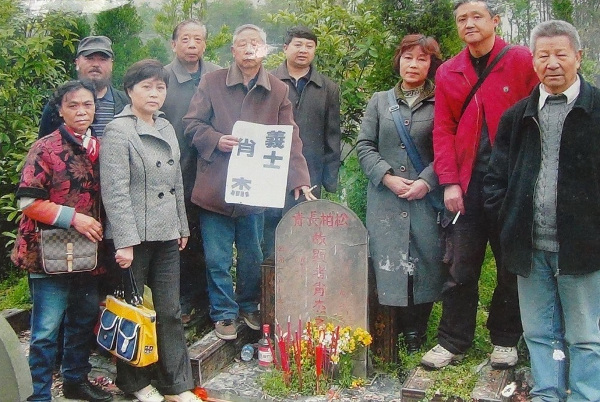