Male, 32, an assistant engineer at the Solar Energy Research Institute at the Beijing Academy of Science and Technology. From: Beijing.

At 2 a.m., on June 4, 1989, Yü was in a stand-off between martial law troops and civilians in the area between Nanchizi and the Natural History Museum. This was where the martial troops shot into the crowds four times. Yü was in the first group of people that got hit. Bullets pierced through his rib area, from left to right, injuring eight of his organs, including the liver, kidneys, and lungs, and grazing his spine. Yü underwent four major surgeries at Beijing Xiehe Hospital. He died at the hospital 20 days later, at 9 a.m. on June 30. Yu’s ashes are kept in an urn at Baobaoshan.

Yü’s parents were both retired cadres. His wife, Xu Liping, worked at the same work unit as he did. Their son was four years old.

In addition to the young child, Xu had to care for an ailing mother-in-law, and a father-in-law and a younger sister who were both disabled. Determined not take her son out of kindergarten, Xu scrimped on expenses and, for several months, resorted to picking discarded vegetables from the morning market. In December 1995, Xu converted to Catholicism. She left for the United States in February 2011.

Xu Liping (许力平) is a member of the Tiananmen Mothers. 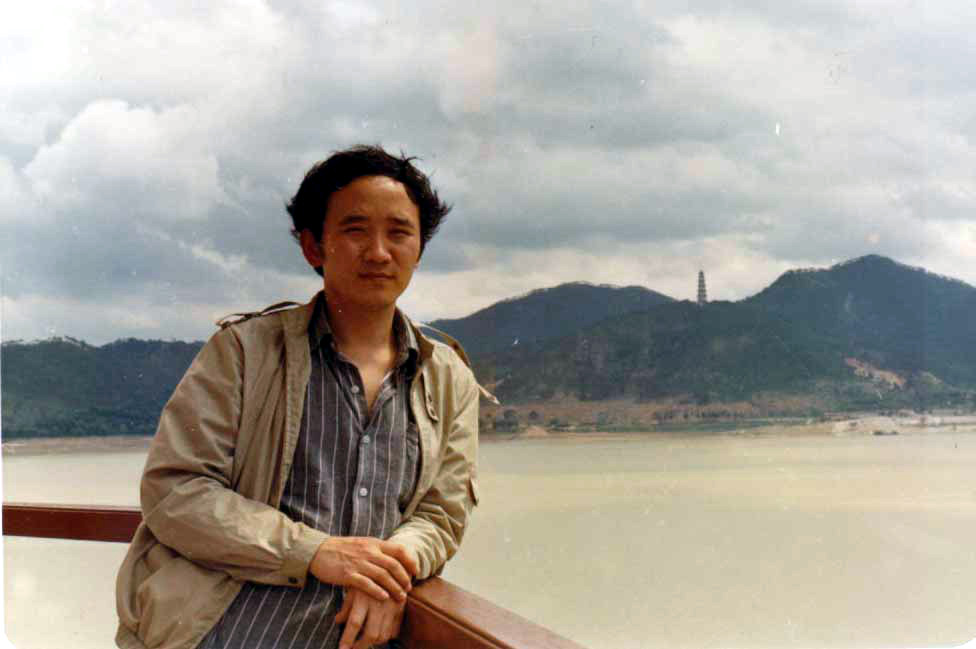 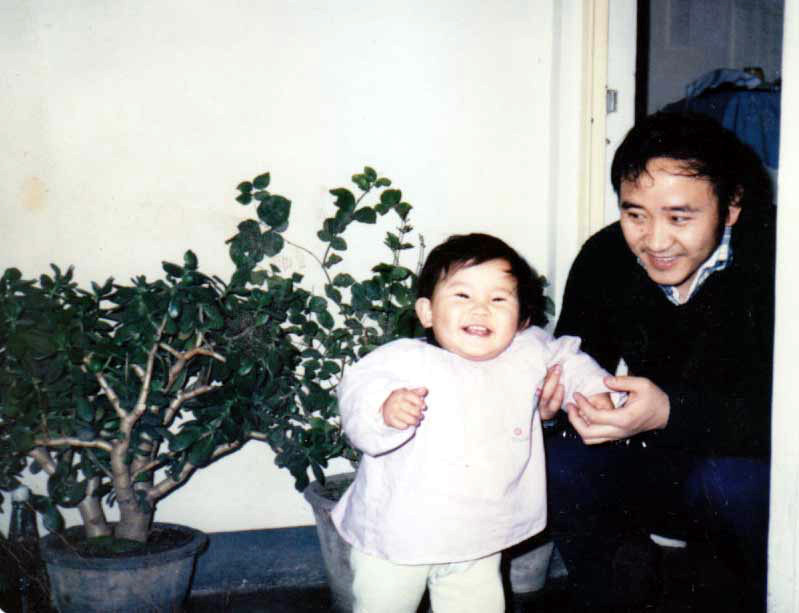 Yü Di and his son 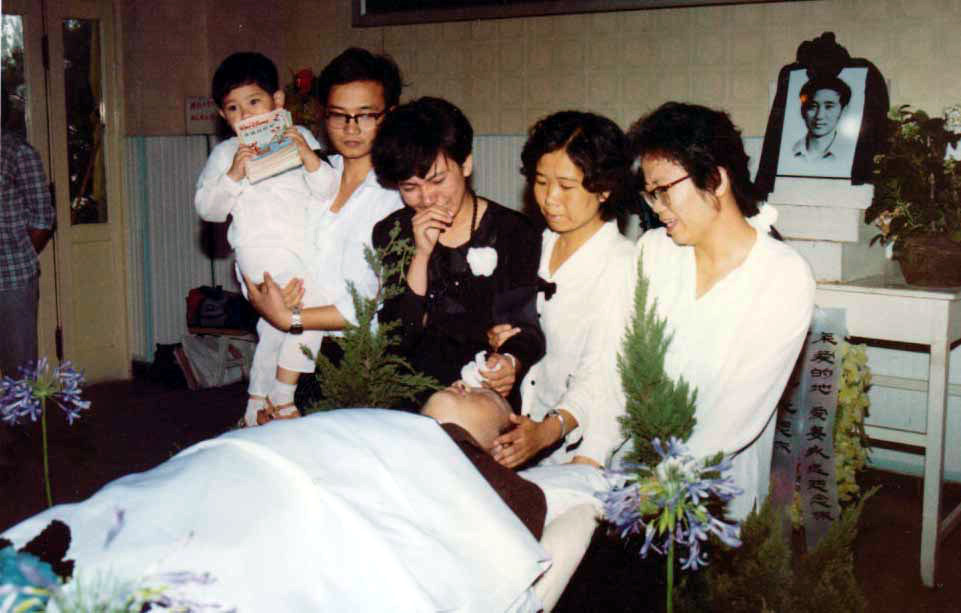 Yü’s family at his funeral 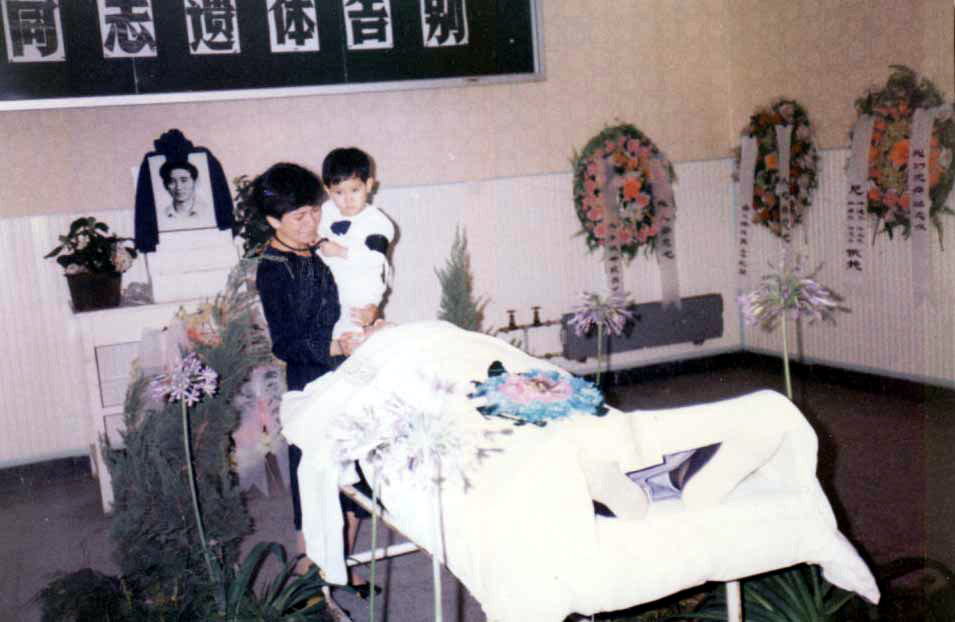 Yü’s wife and son at his funeral 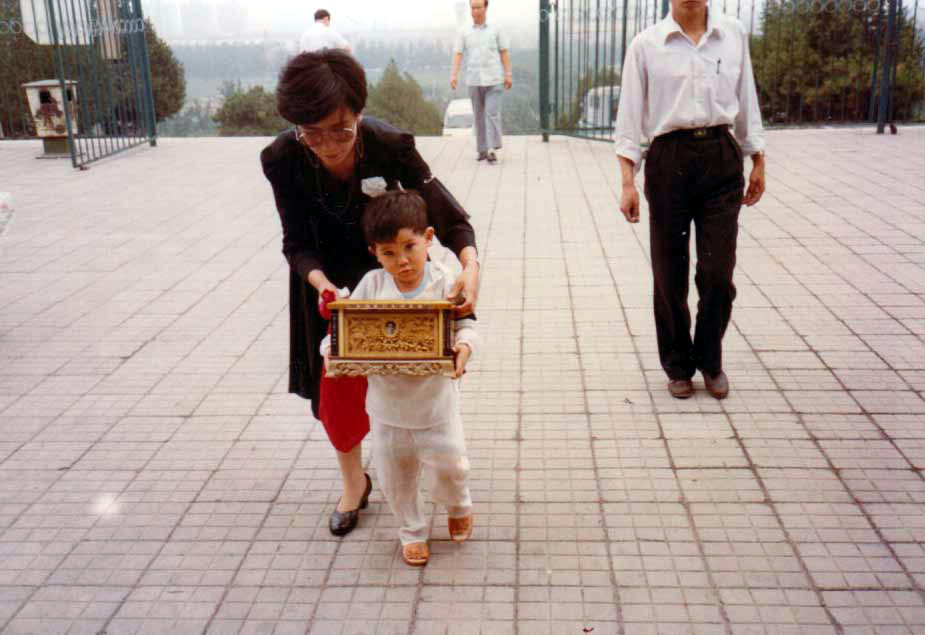 Yü’s wife and his son holding his urn 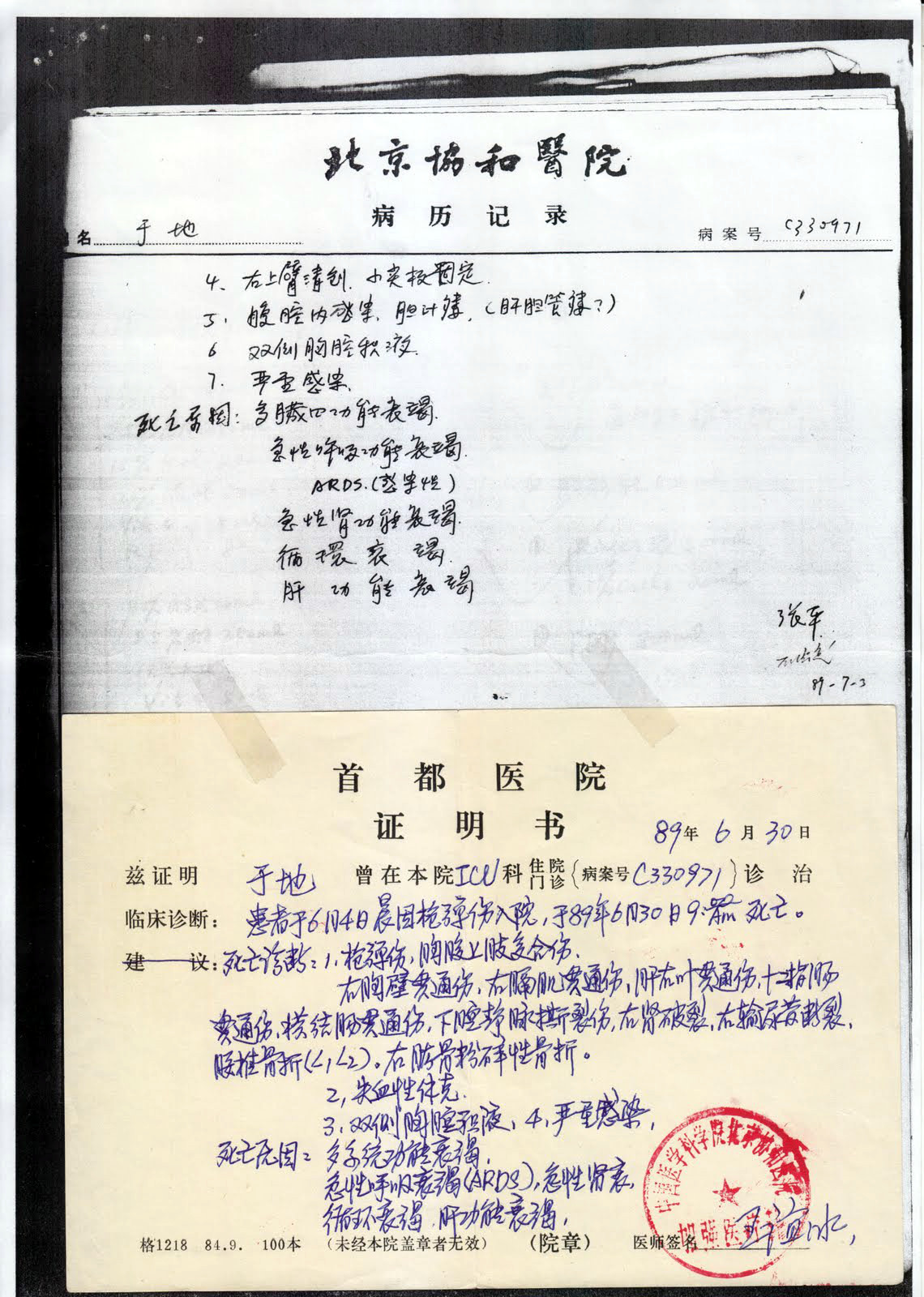 Photocopy of (top) part of Yü’s medical records at the Beijing Xiehe Hospital and (bottom) death certificate issued by the Capital Hospital stating the cause of death as multiple organ failure, including of the kidney and liver, and acute respiratory distress syndrome (ARDS).

On June 3, 1989, at around 6 p.m., my husband told his parents about the horrific sight he witnessed in Xidan. Emotional and tearful, he said: “I have never seen the elderly and children run home to get sticks to defend themselves?! If this is the kind of ruling party we have from now on, I’ll consider quitting the party.” After dinner, my husband asked me to prepare a wet towel for him in a plastic bag, in case the military would use tear gas like they did in the afternoon. . . . And just as a precaution, he wrote down his name and contact phone number on a very small piece of paper and put it in his pocket. And he left . . . and never came back.

My life has been hell since my husband was killed by Chinese communist soldiers in 1989. Although many relatives and friends sympathize with us, some are under political pressure and control and dare not get near us. For 22 years, the Chinese Communist Party has never stopped using its power to persecute our spirits and minds.

After the 20th anniversary of June Fourth, a policeman moved into the basement of the building where I live now to conduct round-the-clock surveillance on us. I once asked him why he didn’t go home, why he had to live in that unlivable basement. The policeman gave me a resigned smile and said, “Don't ask. Nothing I can do. The biggest help you can give me is not make any trouble.”

It is precisely policemen like him, who would bring along guard dogs on every anniversary of my husband’s death to prevent me from getting near the spot where I placed my husband’s ashes at Babaoshan Revolutionary Cemetery 20 years ago—in the name of “protecting” me. After 20 years, we are still being “protected”!